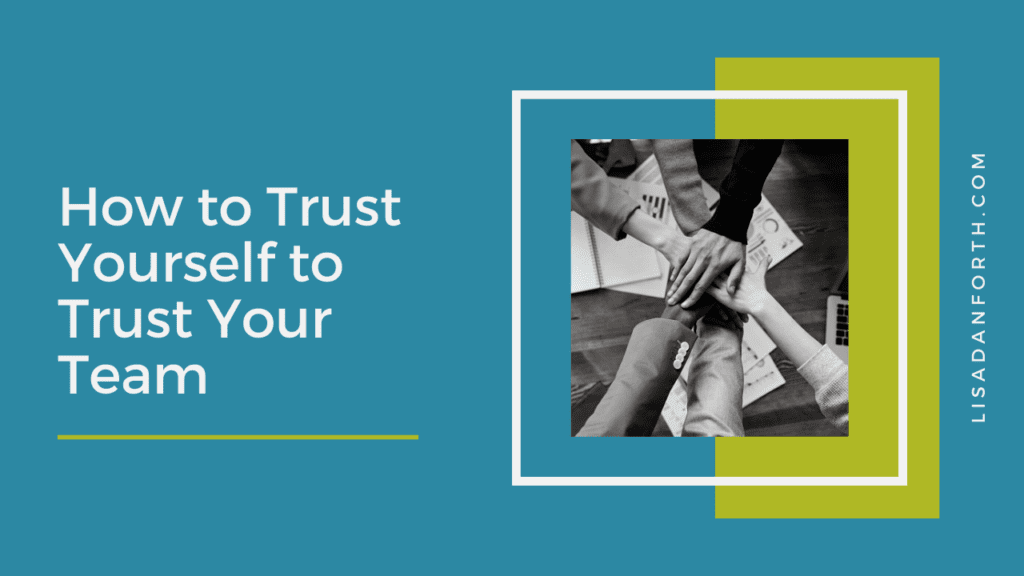 When I say the word accountability, what comes to mind?

Is the first word “trust?”

Yet, in reality, when we’re holding our teams accountable, what we’re saying is, “I trust you. You have what it takes to get the work done. I believe in you.”

Typically these leaders have not yet realized the direct connection between those two values. What happens when you don’t understand the interconnected dance that’s taking place? You can’t ask your team to join you in it and you’ll struggle to effectively lead.

On the opposite side of the accountability coin, when we resist holding individuals accountable, we’re saying, “I don’t believe in you. I don’t think you’re capable.”

(Now, the last statement may be true, you don’t trust them. That is an entirely different conversation. And an invitation to figure out why you’re keeping a person who is not the right fit for your company.)

A recent client, David, came to me looking for someone to help hold him accountable and move him towards being the leader he wanted to be for his staff, his future business plans, and himself.

His main challenge? We were in agreement there – it was that he didn’t trust his team. And he didn’t know where to start on changing that.

He wanted to get out of the day-to-day details and the DOING so he could work more on the higher-level vision, strategy, and growth of his business. Which are, as it happens, his areas of brilliance.

But David lacked confidence in himself as a leader and in his decision-making when delegating. Instead, he was spending his time – all of it, not just the workday – doing the work himself, not leading, listening, and empowering. He was burnt out, frustrated, and knew his team was following in his emotional footsteps.

What’s holding you back from trust and accountability?

The difficulty, more often than not, comes down to the need to be liked. Leaders who don’t want to be seen as overbearing or aggressive ultimately let their fear interfere with them inviting their team to step forth and do the job that’s expected.

In your team. Trust they’re capable and willing to do the work, or capable of figuring out how to get there, and seeking guidance when they don’t. Most people really do want to do a good job.

In yourself. Trust that YOU have what it takes to lead effectively. Stop the second-guessing and shoulding.

This is graceful accountability. One that says to your team, we don’t beat ourselves up, but we don’t let ourselves off the hook.

The first plan of action for David was to gain clarity on his strengths and weaknesses so he could confidently delegate and trust his team – and himself.

He committed to try new approaches, to fail, learn, and do it better next time. And, to apologize when he was “that overbearing manager,” and then invite conversation.

David brought strength, transparency, vulnerability, and authenticity to his leadership.

He started trusting himself more and more as a leader.

He started delegating to his team more consistently, holding them accountable to their goals, their commitments, and their growth.

I’m thrilled to say that David’s original timeline for his plan, to have an owner-independent company in 10 years, has now changed to 2 years.

All because he was willing to do the work and trust. Himself. His team.

We need to trust that WE have what it takes to be a leader, and hold ourselves accountable, or reach out for support to be held accountable to our dreams.

How do you lead from a place of trust and accountability?

If you struggle with these same traps there are three shifts you can make that will set you up to be the leader you want to be.

Know the outcome you want. Get clear in your intention and your requests.
Ask for confirmation that your team understands what is expected, and when.
Do they have everything they need to accomplish their goal or task?
Is there a skill set they need to add or augment?

As Brene Brown says, “Clear is kind. Unclear is unkind.”

Bring compassionate curiosity to the table, not criticizing. We all want to be seen and heard.
Ask, then listen with the intent to understand, NOT to be understood.
If a team member isn’t performing at the level we want, it’s often a result of an unmet expectation.

Let them know you’ve noticed things are being dropped and ask about it.
What’s getting in the way? Are they clear on the expectations?
When a team member is not performing the problem often is that many of our expectations are also uncommunicated.
Put the judgment on hold and look through the lens of curiosity. What’s really going on? How can you clearly and intentionally work through this together?

Pause and connect to the person you want to be.
Let go of what has not been serving you or your team.
Be transparent.

Notice, all three strategies are Being, not Doing.

We have the “doing” part down. It’s who you’re Being in the moment that is the rocket fuel.

So now, ask yourself, “What is the outcome I would like to see?”

Then engage your team in defining the path to that end goal. Frame the dialogue in a way that invites them to the conversation. And really listen to them.

This site uses Akismet to reduce spam. Learn how your comment data is processed.